High hamstring pain develops slowly for distance runners and become nagging and chronic. It consists of inflammation at the attachment of the hamstrings (the Semitendinosus, the semimembranosus, and the long head of the Biceps Femoris) to the Ischial Tuberosity, or more commonly referred to as the sitz bones. That is why this condition will be aggravated by sitting for long periods of time in a car or more quickly on a hard surface. From my experience, unless it is extremely acute, this pain will fade out while running and come on again after running as the muscles tighten up. Running form and body use adjustments can heal this injury quite quickly in most cases without significant training loss.

I have found, having had this condition when running trail ultra-distance races, and working with a number of road runners and trail runners who have come to see me with these complaints, there are two common patterns often seen in a person’s running form.

The first is that the hips are pulled back, upper body often leaning forward (not always, it could be arched back and being pulled along), and legs over-striding out front. The second is “sitting back in the bucket,” the knees are bent in a crouching position, torso is upright with little, if any, forward lean or arched back. In both cases the force production for forward movement is generated from a pawing the ground, engaging the Hamstrings in a powerful concentric contraction pulling the body forward, at a point in the stride that they would be relatively inactive. A mild over-stride in combination with hill climbing will greatly increase the force requirements of the Hamstrings, as does speed work. 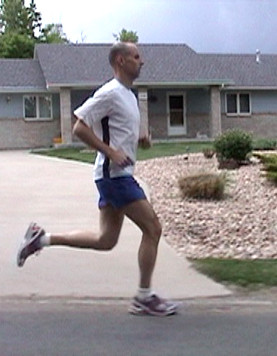 Sitting back in the bucket 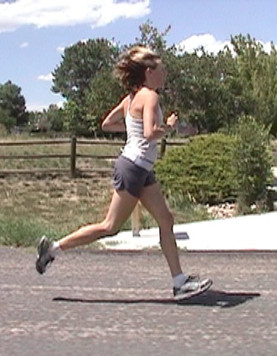 Hips back, arched spine, and an overstride

A third consideration is a one-sided muscle imbalance that could affect either side of the body in terms of compensations resulting in Hamstring pain. This will also respond favorably to form corrections.

As in most overuse injuries in runners, a strategy is adopted when the core of the body isn’t engaging correctly either due to muscle imbalance, body position and posture, or a combination of the two. In this case the strategy is to pull the body forward using the hamstrings.

Good focuses to use when running:

Visit Rehabilitation Coaching / Recovery Running to see how Radiant Running  can help you get past your injury.

To schedule an appointment with Douglas, email douglas@nullradiantrunning.com, or call 303-499-2062.

An update re: Coronovirus

Read Douglas’s thoughts on different options to safely interact with clients during the coronovirus crisis.

Videos: Healing on the Run

Learn more about my Healing on the Run approach to healing and preventing running injuries.

“I sought Douglas’ help after suffering from chronic running injuries over the past 15 years … although I live in the Midwest, Douglas’ sage advice is never more than a phone call, email, or Skype session away.” Read more …

What People Are Saying